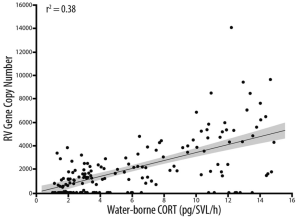 Declines in amphibians are a global problem, influenced by complex local factors. While many factors contribute to these declines, much attention has been focused on the roles of contaminants and pathogens. Throughout eastern South Dakota, row-crop farming has contributed to habitat degradation for many amphibians, often through increases in environmental contaminants. For two years we visited four wetlands (two reference wetlands, two agricultural wetlands) to measure water-borne corticosterone (CORT) release rates and ranavirus in larval Western Tiger Salamander (Ambystoma mavortium). We found that both water-borne CORT release rates and ranavirus infection load were greater in larval salamanders from agricultural wetlands compared to reference wetlands. We also found that water-borne CORT release rates were greater in ranavirus-infected individuals compared to uninfected individuals and that water-borne CORT is positively correlated with ranavirus infection load. Though the causal relationships among contaminants, CORT, and ranavirus infection are difficult to determine, chronically elevated CORT is known to be immunosuppressive and may result in high infection loads. This study further describes the negative effects of crop production on amphibian health, provides the first evidence of ranavirus in South Dakota, and supports the use of water-borne CORT as a biomarker of amphibian population health in row-crop landscapes.