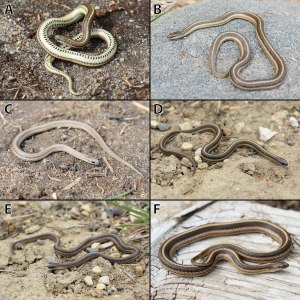 Earlier this year I was awarded funding from South Dakota Game, Fish and Parks to survey for the state-endangered Lined Snake (Tropidoclonion lineatum) along the James River in southeastern South Dakota (see earlier post). As part of this survey work, two trips were planned: one trip in the spring corresponding with the the first days of warm temperature and one trip in the fall, corresponding with the final warm days of the year before snakes enter hibernacula. I recently completed the fall survey trip and despite most overcast days, I was able to overlap with an unusually warm day (3 October 2018; 30°C/86°F), and found eight Lined Snakes; unfortunately, all were dead on the road. These specimens were collected as voucher specimens and will be used as reference material and provide tissue samples from this population of Lined Snakes in Hutchinson County to determine if there is gene flow between this population and populations along the Big Sioux River. These eight Lined Snakes, combined with the eight individuals I found during the spring survey period (6 live, 2 dead) confirm an established population of Lined Snakes in this region along the James River. Due to the lack of detection of Lined Snakes outside of this locality, this may be a small, isolated population rather than a large, widespread population along the lower James River.